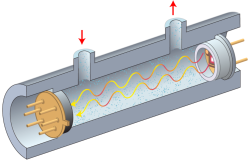 An NDIR gas sensor (nondispersive infrared sensors) is a simple spectroscopic device often used as gas detector. It is called nondispersive because the wavelength which passes through the sampling chamber is not pre-filtered. Instead a narrow bandpass (or NBP) filter is used before the detector.

The NDIR sensor is a broadband IR detector using one of the following technologies:

The NBP filter turns the broadband detector into a very specific narrow band detector that looks at a specific IR band that the target gas absorbs.

The NDIR system needs a broadband IR source. This source can be steady state for thermopiles, but needs to be pulsed for pyroelectric and lead selenide detectors.

Sensitivity of the NDIR gas sensor system is improved by:

Any cookies that may not be particularly necessary for the website to function and is used specifically to collect user personal data via analytics, ads, other embedded contents are termed as non-necessary cookies. It is mandatory to procure user consent prior to running these cookies on your website.